The Ghost Train Through the Countryside

A steamy spooktacular ride from Wirksworth into the darkness

From the creators of our sell-out Christmas experience and Legendary summer show, comes our mystical new Halloween-themed theatrical production through the darkness!

The Station Cafe at Wirksworth will be open for the sale of refreshments and snacks for you to take with you.

We encourage everyone to get into the spirit of the event and dress up. Groups in fancy dress receive 10% off in the Station Cafe. 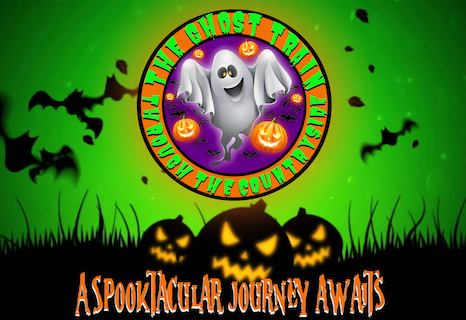 Many years ago a dark spell was cast across the Ecclesbourne Valley, making it become overgrown and free of all trains. But of course, you already know that part!

What is less known but arguably more legendary is a group of friends known as the "The Spooky Society". Once a year, every year, these monsters would gather in a celebration of Halloween. They would tell stories of their past, sing songs and celebrate everything spooky. That is until one year when the party was interrupted.

The monster heard a large roar coming through the trees. They ran in fear of what kind of monster was coming after them. It was big. A fire glowed from its centre and smoke flew high into the sky, it was pulling lots of carriages that where full of humans. The monsters watched and realised that a bigger monster hadn't in fact come to get them but rather the trains had returned. This made the monsters worried that the valley was no longer safe for them. However, as a gesture of goodwill, the railway offered to be a safe space for them by running a private train each year just for them. One monster though simply known as "The Guard" hated humans and trains. And not only did he refuse the offer, he promised to one day stop the train forever. The nicer monsters still took the railway up on its offer and ride the train every year !

This year however is going to be a bit different. The Monster known as 'The Guard' has returned and our Countryside Friends, Mr Tickets and Prez are terrified of 'The Guard' so they need some help to protect the train and the spooky society. But who could possibly protect train? Maybe the person who made this valley a safe space for these monsters to begin with? Yes, thats right! The dark fairy herself, Wyverness. Can Wyverness finally find a way to be good and help this Halloween gathering go smoothly?

Can she seal 'The Guard' in the mysterious Compartment 666?

Or will ghosts of the railway's past return and pull Wyverness further into the darkness. Join us for a spooky evening like no other!